A transition from fetal hemoglobin (HbF) to adult hemoglobin (HbA) normally occurs within a few months after birth. Increased production of HbF after this period of infancy ameliorates clinical symptoms of the major disorders of adult β-hemoglobin: β-thalassemia and sickle cell disease. The transcription factor BCL11A silences HbF and has been an attractive therapeutic target for increasing HbF levels; however, it is not clear to what extent BCL11A inhibits HbF production or mediates other developmental functions in humans. Here, we identified and characterized 3 patients with rare microdeletions of 2p15-p16.1 who presented with an autism spectrum disorder and developmental delay. Moreover, these patients all exhibited substantial persistence of HbF but otherwise retained apparently normal hematologic and immunologic function. Of the genes within 2p15-p16.1, only was commonly deleted in all of the patients. Evaluation of gene expression data sets from developing and adult human brains revealed that expression patterns are similar to other genes associated with neurodevelopmental disorders. Additionally, common SNPs within the second intron of are strongly associated with schizophrenia. Together, the study of these rare patients and orthogonal genetic data demonstrates that BCL11A plays a central role in silencing HbF in humans and implicates BCL11A as an important factor for neurodevelopment.

Involvement of in the 2p microdeletion syndrome. 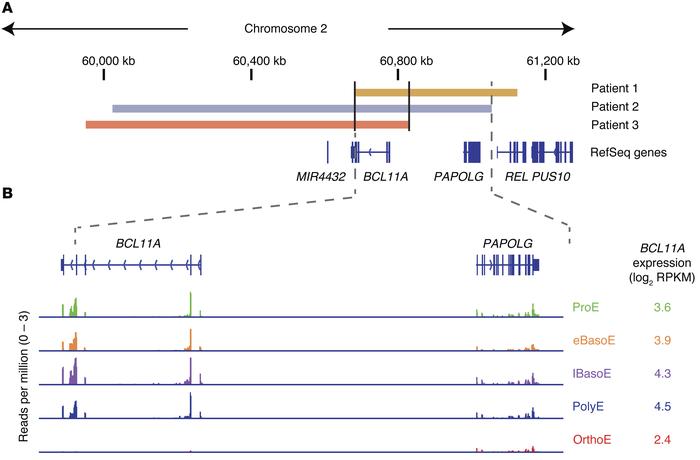 () A depiction of the 2p15-p16.1 region with coordinates shown (hg19). The position of the patient deletions are shown in orange (Patient 1), blue (Patient 2), and red (Patient 3), and RefSeq genes are shown below. The commonly deleted region of patients 1 and 2 is shown between dotted lines. () The common deleted region of patients 1 and 2 involving and . RNA expression is shown below at various stages of human erythroid differentiation. This includes proerythroblasts (ProE), early basophilic erythroblasts (eBasoE), late basophilic erythroblasts (lBasoE), polychromatic erythroblasts (PolyE), and orthochromatic erythroblasts (OrthoE). The height of RNA peaks in each region demonstrates the number of reads per million at that site and the reads per kb per million (RPKM) mapped reads for is shown in log2 scale.