GATA2 is required for lymphatic vessel valve development and maintenance

GATA2 is required for lymphatic vessel valve development and maintenance

Heterozygous germline mutations in the zinc finger transcription factor have recently been shown to underlie a range of clinical phenotypes, including Emberger syndrome, a disorder characterized by lymphedema and predisposition to myelodysplastic syndrome/acute myeloid leukemia (MDS/AML). Despite well-defined roles in hematopoiesis, the functions of GATA2 in the lymphatic vasculature and the mechanisms by which mutations result in lymphedema have not been characterized. Here, we have provided a molecular explanation for lymphedema predisposition in a subset of patients with germline mutations. Specifically, we demonstrated that Emberger-associated missense mutations result in complete loss of GATA2 function, with respect to the capacity to regulate the transcription of genes that are important for lymphatic vessel valve development. We identified a putative enhancer element upstream of the key lymphatic transcriptional regulator that is bound by GATA2, and the transcription factors FOXC2 and NFATC1. Emberger GATA2 missense mutants had a profoundly reduced capacity to bind this element. Conditional deletion in mice revealed that GATA2 is required for both development and maintenance of lymphovenous and lymphatic vessel valves. Together, our data unveil essential roles for GATA2 in the lymphatic vasculature and explain why a select catalogue of human mutations results in lymphedema. 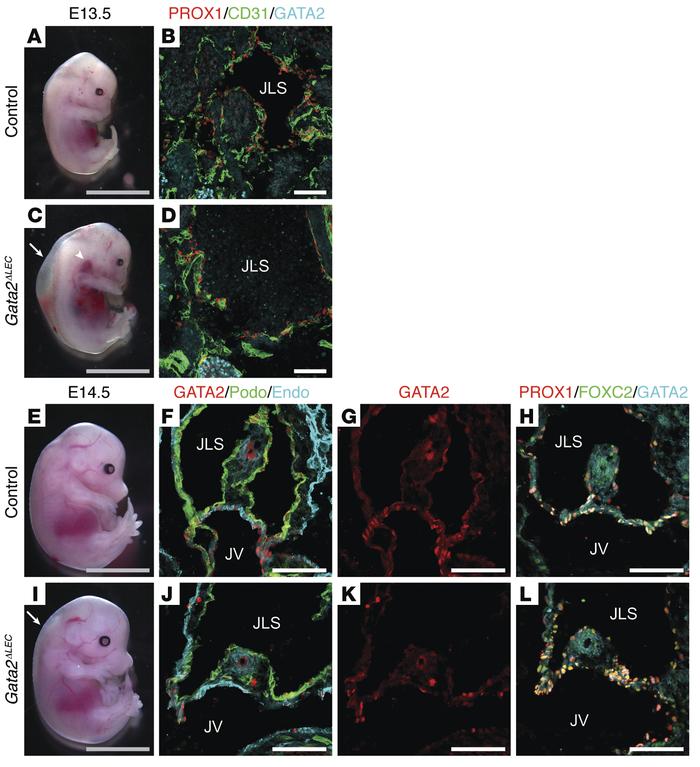