The umbrella cells that line the bladder are mechanosensitive, and bladder filling increases the apical surface area of these cells; however, the upstream signals that regulate this process are unknown. Increased pressure stimulated ATP release from the isolated uroepithelium of rabbit bladders, which was blocked by inhibitors of vesicular transport, connexin hemichannels, ABC protein family members, and nucleoside transporters. Pressure-induced increases in membrane capacitance (a measure of apical plasma membrane surface area where 1 μF ≈ 1 cm2) were inhibited by the serosal, but not mucosal, addition of apyrase or the purinergic receptor antagonist PPADS. Upon addition of purinergic receptor agonists, increased capacitance was observed even in the absence of pressure. Moreover, knockout mice lacking expression of P2X2 and/or P2X3 receptors failed to show increases in apical surface area when exposed to hydrostatic pressure. Treatments that prevented release of Ca2+ from intracellular stores or activation of PKA blocked ATPγS-stimulated changes in capacitance. These results indicate that increased hydrostatic pressure stimulates release of ATP from the uroepithelium and that upon binding to P2X and possibly P2Y receptors on the umbrella cell, downstream Ca2+ and PKA second messenger cascades may act to stimulate membrane insertion at the apical pole of these cells. 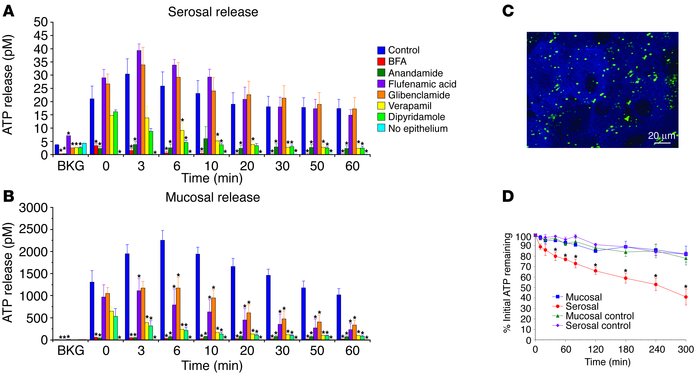