In the stomach, chronic inflammation causes metaplasia and creates a favorable environment for the evolution of gastric cancer. Glucocorticoids are steroid hormones that repress proinflammatory stimuli, but their role in the stomach is unknown. In this study, we show that endogenous glucocorticoids are required to maintain gastric homeostasis. Removal of circulating glucocorticoids in mice by adrenalectomy resulted in the rapid onset of spontaneous gastric inflammation, oxyntic atrophy, and spasmolytic polypeptide-expressing metaplasia (SPEM), a putative precursor of gastric cancer. SPEM and oxyntic atrophy occurred independently of lymphocytes. However, depletion of monocytes and macrophages by clodronate treatment or inhibition of gastric monocyte infiltration using the Cx3cr1 knockout mouse model prevented SPEM development. Our results highlight the requirement for endogenous glucocorticoid signaling within the stomach to prevent spontaneous gastric inflammation and metaplasia, and suggest that glucocorticoid deficiency may lead to gastric cancer development. 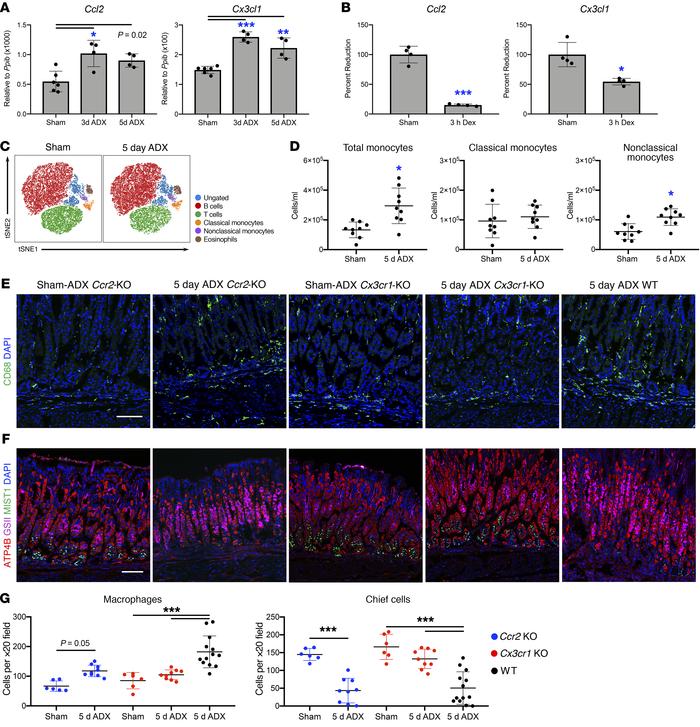